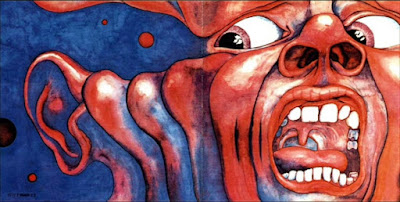 
The artifact that you see in front you are the album cover for King Crimson: In the Court of the Crimson King (1). This album was first released in April 1969, three months before the moon landing, and has reach No.5 on the UK Albums Chart. The album depicts two characters the album references: The Schizoid Man, and the Crimson King. These abstract characters that are painted distorted want to be analyzed and scrutinized. Makes a person wonder who these beings are and when they could exist in a person’s mind. King Crimson’s album cover is a perfect example of the new realities that people around the world are experience during this time. From the Vietnam war, to the space race the United States and Russia are competing in.
The character King Crimson is floating in what seems like space, His hands are in position to do a Buddhist mudra, and his smile is not indicative of his sad eyes. In this timeframe, the United Kingdom, has had the band The Beatles just visit the country India in 1968. In the book American Veda by Philip Goldberg, he writes that the trip to India by the Beatles sparked a fascination and changed the outlook on eastern spirituality and the transcendental meditation studies for the western culture. This art is a clear representation of that attitude. The King is literally floating, representing enlightenment, while he is gesturing a mudra with his hands. This depicts a positive outlook towards the unknown of spatiality and of this being.
In the first week of readings, we read Ken McLeod’s Space Oddities: aliens, futurism and meaning in popular music (3). He says in the journal: “As a society we often seek to absolve ourselves of responsibility for our own social problems in a way that promotes intolerance of immigrants, racial and religious divides, and virus fears. (3)” Which I disagree with during the release of this album cover/ painting.  In 1969 the world was at war, but was sick of it. The pop culture of the time was to trying to accept the different and the unknown. (Ken writes an alien is an unknown that is bundled up in an idea, the alien is a “…fascination with the unknow, the unidentified. (3)”) There were activists trying to educate and destroy all types intolerance: immigrant(aliens), racial and religious intolerances.
Then the main character, the schizoid man, is the person or the everyday people of the era. He is the one fearing the aliens. The schizoid man is the one who will be the one fighting in the wars and is being pulled apart by the hypocrisy of being drafted into war then watching a moon landing that is supposed to mark a great achievement of mankind. He is painted like he is being stretched to his limits. These limits are the limits of man, before reaching any type of spiritual enlightenment. Which I think is what King Crimson is offering as you turn the album around to see the King. King Crimson: In the Court of the Crimson King is a beautifully painted album that sparks thought and reflects the era in which it was painted.